As mid-December approaches, I'm sure some of you are curious about where things are headed with the Historical Food Fortnightly. I've been very missing for most of the year. Life has been exciting - some of it very good, some of it difficult. That has necessarily changed my focus on many things
The Historical Food Fortnightly was born from the germ of an idea in my head. I wanted to learn more about the history of cooking and food for my own purposes of historical reenactment and living history. I figured the best way to learn would be to challenge myself to do it more often. I thought I could blog about it to keep myself more honest/on track. Melissa pointed out that others would probably want to join in that journey. That's how this all started.
After the first year, I felt like I had achieved what I had set out to do - learn more and become more adept at historical cooking. Over the past year, my focus has shifted back to things for which I have a greater passion - sewing and knitting, researching mid 19th century life and presenting that research. I also now have a fiance, and we're getting ready to merge our households and get married next year.
I have decided, with a great deal of contemplation and difficulty, to not continue the Historical Food Fortnightly in January 2017. I do not know when, if ever, I will pick it back up again. I have enjoyed the past few years of getting to know all of you and exploring historical cooking and foodways together, and I'm grateful for the experiences we've had. Thank you so much for all you have contributed, your willingness to share, your good humor and positivity. You all have made this adventure so much more than I ever thought it could be! I hope you all will continue experimenting and learning - heck, if you need me to throw you a random challenge to spark creativity, just send me a message, I promise I will answer it.
I want to thank Melissa for everything she has done, and for spurring me on to this whole thing, as well as innumerable friends who have provided help and encouragement and inspiration along the way, and (although he's not a HFFer) my fiance, The Gentleman Friend who has supported this project and acted as a very amiable and worthy taste-tester. (He ate the Nun's Toast. That's sacrifice.)
The Facebook group will stay open - I have absolutely no intention of taking it down, but I won't be adding new members. Same with the blog. If there ever comes a time to revisit this and revive it (and it might - I'm not good at letting things go gently into that good night) I will keep you all in the know via these channels.
Posted by Betsy at 6:02 PM 1 comment:

Hey everyone! I have updated the challengers list so that it should be up-to-date as of this evening. We have almost fifty participants! That's CRAZY. It's so much bigger than last year! From this point on, since we're a month in, I'll be updating the challengers infrequently - there's just not enough time in the day, and I have to prioritize.

Someone recently asked me if I keep up with all of the blogs. Yes! I totally do! It's my favorite part of running this group - getting to stalk all of you and see the things you're doing. Trust me that if you are participating, you are totally on my radar and I'm rooting for you. I'll even stop and think about you all intermittently - like, "I wonder if Jeanette figured out the maple sugar thing she was asking about in the Facebook group", or "I sure wish I could read the French blogs as they are written, instead of putting them through Google Translate like a fool," or "Do you think Keiley would send me some of those coconut brownies if I asked really nicely?"

You're all important important to me and I think of you all as you're cooking. Know that I'm cheering all of you on, and I look forward to every challenge that every participant completes!

Stay tuned for some features from the second challenge - culinary vices!
Posted by Betsy at 7:12 PM 1 comment:

It's happening, everyone! HFF 2016 is off and running! I'm happy to say that we have over 40 participants, and that's pretty amazing!

The first challenge was all about meat and potatoes, and we had some outstanding recipes! Meat pies and shepherds pies were very popular options. I thought we'd highlight some returning challengers, and some new ones, for this first post.

First up we have Stephanie Ann of The World Turn'd Upside Down, who was one of our challengers last year and contributed many memorable challenges in 2014/2015. She did not disappoint for her first challenge this year: homemade potato chips. YUM. Enough said. Welcome back, Stephanie Ann! 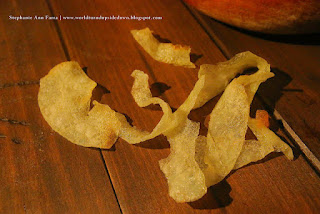 And we have a new challenger: Susan of Nosh and News, who made a beef and potato pie from 1918. She included some great background information from the newspaper where she found the recipe. That kind of context always makes a recipe come alive for me, and that's the kind of thing we're all about around here. Welcome, Susan! 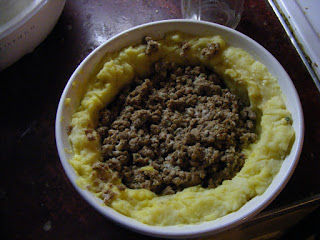 And Now, A Little Housecleaning...

The list of challengers is up-to-date as of January 5th. I haven't had time to update since thing (I've been sick with a sinus infection, there are professional responsibilities, the holidays, blah blah blah). So there are still some challengers that need to be added to the list. I wish I could say it'll be done immediately, but that's just not the case - I have some other things that take priority right now. And I apologize to those who are waiting - you can obviously still participate (there are no rules saying your name has to be up to participate) and I will get you added as I am able, so it'll be like you were always there.

In the meantime, here's a friendly PSA and a sneak peek behind the scenes of running the Historical Food Fortnightly: there's only one way to get your name up on the list of challengers: through the form that's linked on the Challengers page. The form automatically feeds to a spreadsheet that keeps things organized, and that's where I get your name and the web address of your blog to create a link on the Challengers page. Excel rules everything around me. If you post on the Facebook page, if you comment on a post, if you send me an email, it won't get added to the page.

Some people have asked about updating your information (new blog titles, etc). I've added directions for that in the Challengers page.


Back to the Good Stuff!

Next up is Culinary Vices! People have already been posting their delightfully sinful creations, and I'm excited to see the rest of the posts! Keep up the good work!
Posted by Betsy at 8:01 PM 1 comment:

A Reminder About Primary Sources

One of the things we do a bit differently over here at the Historical Food Fortnightly is that we all use primary sources for recipes. In case you're new, I'd like to call your attention to this blog post from last year, just before we started the first round of challenges: Primary Sources and Why They Matter.

You may have noticed I'm not a huge fan of rules. I think rules (while important) tend to get in the way of creativity, so we only have a few rules that we think are Really Very Necessary. One of those rules is that participants use primary sources. It's just way more fun and more cool that way!

But Betsy, I can hear you saying, where do I find primary sources?

You're in luck. It's easier these days to find primary sources than it ever was, thanks to the beauty of the Internet. There are databases and collections at your fingertips, ripe for the searching! We've listed a few of them in the FAQs page.

HFFers*: Anyone care to share some of your primary source goldmines?

*In my mind, this is pronounced "heifers". No offense intended.
Posted by Betsy at 1:16 PM 7 comments:

Just three more weeks until 2016! Have you signed up in the Challengers page? We have a healthy number of participants already!

Remember: even if you participated last year, you need to sign up again! And please, don't leave comments or message me privately about participating - the form feeds directly to a spreadsheet which keeps me sane. Excel rules everything around me.

There is more coming this weekend: stay tuned!

The challenges are here! We're one step closer to kicking off! Click on the Challenges tab above to find out more about them.

Here's some stuff having to do with Historical Food Fortnightly, Round 2 (Electric Boogaloo):


If you want to take part, click on the Challengers tab at the top of the blog and follow the link there to fill out the form. We'll keep adding to the list on a rolling basis as people join!

Let's have a great year of exploring historical cooking together! Stay tuned here for more helpful stuff as we get geared up!
Posted by Betsy at 9:54 AM 5 comments:

Welcome back, everyone! The new year looms closer, and that means that the next year of Historical Food Fortnightly is upon us! I hope you are getting excited!

We're busy getting everything in place, and will have some announcements for you soon. And I mean that, as in "really soon", not just "maybe a month from now." So stay tuned for the latest updates on challenges, themes, and more!

In the meantime, we're gussying up the blog a bit. How do you like the new format?